I know that I have left Nose In A Book alone for far too long.... My personal life was not in a place where I had time to read let alone attempt to review or blog about anything. While I am still terribly busy I've found that I truly miss my interactions here with the authors, fellow bloggers, and other readers. This was an outlet that was for me and my personal happiness alone.... those moms out there can surely understand that!!! lol  I ask for your patience as I try to work this back into my schedule and I ask for your input and what you would like to see happen. I am truly looking forward to rekindling these wonderful relationships that I have desperately missed!!!

Karen
Posted by Karen- Nose In A Book Admin at 7:29 PM No comments:

Thank you for your patience!!!

Things in my personal life became quite difficult and overwhelming last fall and many things fell to the wayside. I have missed reading and Nose In A Book. Posts might still be a little spotty and I try to get everything together and organized, both here and home!!

I would appreciate comments, ideas, and feedback for things you'd like to see here at Nose In A Book!!

Much love and Appreciation, 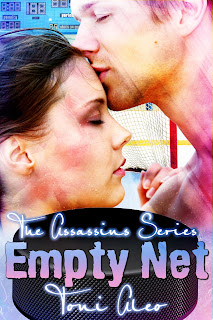 Definition of an Empty Net: When a team pulls the goalie for an extra attacker, desperately seeking a goal.

Audrey Parker was in a horrible place.

She hated her job, her sister was getting married and moving out, but worst of all, she was in love with a total jerk. No matter what she did, every guy she met hurt her. All she wanted was her happily ever after. Her Prince Charming. Her Lucas Brooks! She didn’t know how to change her life but she knew she needed too.
Feeling like she was about to hit rock bottom, Audrey wakes up next to Tate Odder.

Tate Odder had lost everything.

After being brought up from the Assassins’ farm team, the Florida Rays to the Nashville Assassins, Tate hopes he’ll forget everything he has lost. He doesn’t. Each day gets harder to live in a place he doesn’t know. Even being the first rookie goalie to shut out an opposing team three times during the Lord Stanly Cup Finals, he still felt empty. With the loss of his parents and sister still heavy on his heart, Tate isn’t sure how to live like everything is okay.

But when he wakes up beside Audrey Parker, things start to change. She turns his life upside down with her kooky sense of humor and her bright clothing. She is intelligent and beautiful, and for once, he doesn’t feel empty.

Will Audrey be the person to fill the holes in Tate’s heart, making him whole again?

Or will another player ruin everything, leaving him feeling forever like an empty net?

I have to start by saying I love Toni!!! She is awesome... and she's a great writer too!!! *giggles*   I love Empty Net. We start out with the wedding of Fallon and Lucas, the couple from Trying to Score. Audrey Parker loves her sister but is jealous the she has found her Happily Ever After. She has dated jerk after jerk and wants to find her Prince Charming... can she overcome her fears and insecurities to see what is right in front of her?

Tate Odder, or as Audrey likes to say... Tater Ooooooooder, is a young player brought up from the minor hockey league team to join the Assassin's last year. He is dealing with losses of his own. How can he get Audrey to look past their age difference and see that he is the one meant for her?

I enjoyed watching Tate slowly break down Audrey's walls. Empty Net is full of humor, drama, and hot hot sex!!!! *fans self* I admit... there were times I just wanted to take Audrey and shake some sense into her. lol    Please do not let the fact that this book is based on hockey. That is just a backdrop/career like in any other book. Toni has a way of also bringing in past characters into her books so you can see where they are and what's going on with them without the focus becoming theirs. I love catching up with Shea and Ellie. *sighs* Oh, Shea...

Win an ebook from Toni Aleo!!!
Just leave a comment and your email and you're entered! 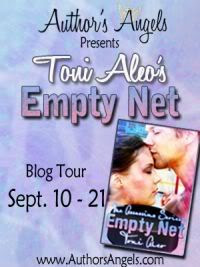 I am so excited to have Toni Aleo stopping by Nose In A Book today! She is one of my favorite authors and, more importantly, a friend.

Story time~ Toni and I started emailing after I had started the blog and wanted to get the Trying to Score release countdown widget... actually, it was Feb 14, 2012. The same day I started Nose In A Book. We have been going nonstop since!!
(Much to our husbands' dismay) lol

Karen~I know that many of your character's are based on real people, where do you find the inspiration for the fictional portion of a character?
Toni~Its really weird, it just comes to me. I am seriously standing in the middle of WalMart, and all of a sudden one of my eyes is all half lidded (not in the sexy way) and my mouth is hanging open, while whoever it is playing in my head. Its scary...
~Trust me on this folks... not pretty... *cringes*

If you could have your readers know just one thing about you, what would it be?
People call me a Shea Weber stalker, but I dont agree with that statement. I just happen to be in love with the sexy hockey player and frequently end up in the same place he is. No big deal.
~Let's just say that Shea has been very understanding and the authorities have yet ot be contacted...


What are your favorite blogs?... ok... you can list more than just one...
I was about to say! Jeez!!! I have a handful of blogs that mean the world to me, Tater's Tail Tails, Insightful minds, The Autumn Review, Dreaming in the Pages, Book Junkie, A Tasty Read, Guilty Pleasures, and of course, Nose in a Book.
~Yeah... *jumping up & down and clapping like a fan girl*

Which hockey game is the most memorable you have ever attended?... alright... you can put more than one here, too... (goodness, authors can be pushy *winks*)
hehehe, That would have to be the one that you came too. Sitting behind the bench and experiencing that aspect of things was amazing. Now if only that glass wasn't separating Shea from me...lol
~Personally, I think Jackie and I were pleased to have the forced separation otherwise our night might have ended with an escort out of the arena and permanent banishment. lol  You can read my take of the night in the My Assassin Experience post. Click here

Is there anything else you would like to share with your readers?
I love you guys! Hope you love my books as much as I do!
~Love you more! 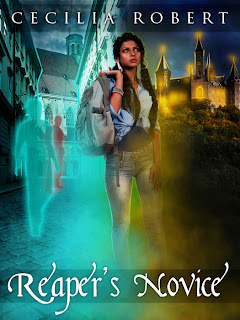 Seventeen- year- old Ana Maria Tei’s life has always been perfect: loving parents,  good grades, and a future so bright it outshone the sun. But now words like “separation” and “divorce” are sending her world plummeting to hell. Determined to keep her family intact, Ana plans a family-bonding trip from Vienna to Tuscany. Except fate has other plans. Ana’s parents and siblings are killed in a car accident on their way to pick Ana up from school.

Enter Grim, aka Ernest. He promises to relinquish the four souls if Ana agrees to trade her soul for theirs and serve a lifetime as his novice. In order for Ana to graduate from her Reaper’s Novice station to a Soul Collector graduate, Grim puts her to test. To her horror, she finds out becoming a Reaper’s Novice didn’t happen by chance.  It was preordained, and she is forced to make a choice:  save her family’s souls or come to terms with who she really is and complete the task set for her.

Karen- Nose In A Book Admin
I am a stay at home mother of four. The kids range from 16yrs old to a one year old. As you can guess, reading is my escape!! I love reading romance novels the best. However, through previewing the books for my eldest, have gotten into the YA genre. I can also be caught with a Tom Clancy, Daniel Silva or type book on occasion.